It was late September when I heard a familiar whisper prompting me to book a room at my favorite spot, The Lands End Inn, Provincetown, MA. After scanning the reservation availability, I found a great rate on a room my husband and I had never booked before. From there we both built up a healthy bit of anticipation; picturing ourselves relaxing in a pair of worn white wicker chairs that resided on the spacious covered porch, feet up, wine and cheese in hand, while taking in the unbeatable water views of the classic Cape Cod shoreline.

Fighting the familiar urge to pack the night before, we cast old habits aside, threw our clothes in a bag on departure morn, and left home with a sense of adventure. After battling our way through Boston traffic, we soon found ourselves crossing the grand Sagamore Bridge – officially making landfall on Cape Cod. With the noon hour approaching, I did some quick research and found a waterfront restaurant in Sandwich, MA, called Fishermen’s View; it sounded perfect for lunch.

As we pulled into the large parking lot I could see the harbor to the left; boats quietly nestled beside weathered docks; a charming view, but the actual restaurant wasn’t what I expected. It looked like brand new construction; devoid of the rustic wharf scene I was hoping for.

Once we entered the building the inevitable dilemma hit me – bar or dining room? (It’s one of my annoying character flaws and I admit it; finding the perfect seat in a restaurant.) On our way to the dining room I surveyed the bar, noticing it had a harbor view. Usually we love to sit at the bar, but this time I needed to see what waited for us in the dining area – maybe it would provide the perfect spot for the two of us to focus on one another.

As soon as I entered the room I knew it wasn’t what I wanted. It was a bright open space with numerous windows boasting a view of the canal, which sounds great, but, there wasn’t a boat in sight, and the room was big, barren, and lacked the warmth I was craving. Fighting my impulses to move, even after we ordered a drink, proved futile. “Change this now or you won’t be happy,” I said to myself, and off we went to the bar, much to our server’s dismay. I felt bad for her, but this was about me! When is the right time to fix a mistake and get what you really want? 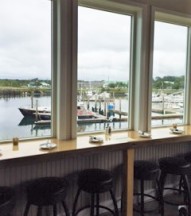 After surveying the bar landscape for the best harbor view, I determined that it happened to be located exactly where a gentleman, probably a local, was sitting, with a host of empty seats to his left and right. I was conflicted; how could we take up valuable real estate practically on top of this man. Once again, I heard the voice, “do what you need to do to be happy.” I made my choice sitting right next to this unsuspecting gentleman. I felt funny, but guess what…the view was great!

After my husband and I ordered drinks and salads, we quietly shared our thoughts for the next few days. Eventually, the man next to me received a generous sandwich platter to go with his beer, which he ate quietly while watching sports news. I still felt funny, but, convinced myself that if the bar was full, I’d be sitting next to him anyway, plus, the view was worth it!

A few minutes later, one of the barkeepers came by and we struck up a conversation with her, talking about where we were staying in P-town, and about recently moving our daughter into a new apartment in Boston. It was that one comment that sparked the attention of our quiet bar mate.

Within minutes we were all laughing and sharing stories about our children – moving days and all, and what they were doing now with college well in the past. We discussed jobs, retirement, and our homes.

Richard, our new acquaintance, was newly retired and loving it! Originally from New York’s Hudson Valley, he and his wife had recently retired to the Cape. He told us how they ended up there; foregoing the expensive trips to exotic locations like Hawaii when the kids were young, which opened the doors for them to buy a small cottage in Sandwich, MA. For Richard and his wife, it was about making memories for years instead of mere weeks.

After our salads arrived, Richard told us about the ‘retirement trade up’; once his girls had grown, they sold the small cottage and upgraded to a larger home just down the street. At one point Richard pulled his phone out and proudly showed us photos of his handy work in the kitchen; a full remodel job – farmers sink, Ikea cabinets, and Corian countertops.

He’d been busy, and that first summer away from work proved to be just what the doctor ordered. He was exercising more, making his own flies and fishing for unruly stripers off the jetty, cooking with fresh herbs and produce from his garden, and working on his pride and joy – his MG. Life was good.

But, as we all know, with every life the good cannot exist without a bit of competition. So typical isn’t it, that you’re going along in life, probably taking some days for granted, but always planning for your future, only to be told when you’re ready to retire that your body has decided not to cooperate. About mid-conversation Richard confided in us; right before his retirement he found out he had Leukemia. It was prevalent in his family, but not the news he expected.

Whether we are led by fate, good karma, or the hand of something more powerful than us, sometimes we find ourselves at the right place at the right time. In Richard’s case, his wife, a retired teacher and now freelance writer, found herself working as a manager in their local gym, and she happened to befriend a woman who could connect Richard with a well-known doctor at Dana Farber Cancer Institute in Boston. How ironic, he remarked to us, that his wife would know this particular woman, and then he expressed how lucky he felt to be in the care of such a professional.

With retirement close, there was no time like the present for Richard to take better care of himself. It all seemed to go hand in hand. No more work meant more time for him to exercise, enjoy his family and friends, his hobbies and passions. It allowed him room for progression, no matter his diagnosis, and in turn his body responded with positive results.

After conversing with Richard for a mere hour or so, I believe without a doubt that no matter his physical progress, he would still find happiness and contentment in his life. He just had that quality about him that told the world, “No matter what, I will live my life to the fullest and I will be content with what I have been given.”

By the end of our time, Richard happily shared that his first grandchild was due next year, and that he decided to start a journal, chronicling family history and the goings on of everyday life leading to the joyful birth, and hopefully for many years beyond that day. He talked about how he would be including our chance meeting in that journal. He was in a good place, and we were happy for him.

It’s these moments in life that make you sit back in wonder. Here I was, selfishly choosing a seat at the bar, crowding a quiet gentleman who was just trying to enjoy a solitary lunch, so that “I” could have a seat with a good view. In the end, I believe we were meant to meet Richard, not only to share a bit of ourselves with him, but more importantly, to have him unselfishly share his life with us. Sharing his diagnosis, sharing his outlook on life…it was like receiving the gift of perspective. 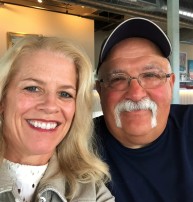 In the end, the harbor view really didn’t matter, it was the view to the left of my seat that was important because it allowed my husband and me to share an hour with an amazing man who robustly took each day and lived it to what he determined was the fullest. It truly was the best seat in the restaurant!

Lil Serena lil fire👊🏻
The most unsatisfying mowing experience🥲
Comparing student loan forgiveness to our Lord and Savior dying on the cross for our sins is sacrilegious.
I walked across the grass this morning…I think I broke it🤭