It’s 7 p.m., the dinner dishes are done and you’re sitting in a comfy chair, feet up and for the most part feeling relaxed and content. All is quiet, until, and without warning, a jarring high pitched noise echoes throughout the room. You feel the urge to get up, but your significant other beats you to it; rising like a phoenix from the ashes and stepping onto the well beaten yellow brick road to a place where dreams really do come true; the kitchen.

Before you know it one innocent jelly bean has turned into three, and then a handful.  What the heck happened, everything was going so well. You suddenly realize you’ve been sucked into a colossal vortex of snacking mania; pandemonium has set in. What’s the point in stopping now you rationalize; just kill the bag!

Self-Control: restraint of oneself or one’s actions or feelings, etc. Willpower: control of one’s impulses and actions; self-control. Discipline: to bring to a state of order and obedience by training and control. (1)

Studies over the years have shown that people who have better self-control have higher GPA’s, better relationships and financial security, less abusive behaviors and criminal convictions, better health and overall sense of well-being, and a general understanding that delaying gratification to get a greater reward is worthwhile. Now that we have established the positive effects of using self-control, how can we get some?

In order to find the answers let’s ask a few questions. Are we genetically wired wrong or is our environment to blame for our lack of self-control? What part does our brain play? Can we physically deplete energy stores needed to exert self-control? What negatively influences our abilities to engage self-control? And finally, what positive strategies can we incorporate to be successful?

We have been lead to believe that our environment is the culprit behind our lack of self-control, but not so fast.  A study done by Professor Timothy Bates, School of Philosophy, Psychology and Language Sciences at the University of Edinburgh, reveals that genetics may play a bigger role in the development of well-being than once thought.

“A study of more than 800 sets of twins found that genetics were more influential in shaping key traits than a person’s home environment and surroundings. The study of twins in the US – most aged 50 and over- used a series of questions to test how they perceived themselves and others.” (2) (Results were measured according to Ryff Psychological Well-Being Scale.)

The results showed that identical twins were twice as likely to share traits as non-identical twins, which strengthens the argument that character traits are genetically carried through family lines. Professor Bates concluded, “the genetic influence was strongest on a person’s sense of self-control.” (2)

So, it’s not out of the question that you could have a genetic predisposition to lack self-control. Maybe great grandma couldn’t say no to that second or third piece of chocolate cake and she passed that trait on to you. In the end, as long as you don’t come from a long line of criminals, does it really matter? Even if you know it’s genetic, you’re still struggling. You need a plan, a strategy to outwit yourself.

A group of researchers from the California Institute of Technology in Pasadena (Hare, Camerer, Rangel) conducted a study, “Self-Control in Decision-Making . . .,” (3), which through MRI, studied the ventral medial prefrontal cortex and the dorsolateral prefrontal cortex of a select group when it comes to making healthy and non-healthy food choices.

“In the non-self-controllers, Rangel notes, the vmPFC seemed to only take the taste of the food into consideration in making a decision. “In the case of good self-controllers, however, another area of the brain–called the dorsolateral prefrontal cortex [DLPFC]–becomes active, and modulates the basic value signals so that the self-controllers can also incorporate health considerations into their decisions,” he explains. In other words, the DLPFC allows the vmPFC to weigh both taste and health benefits at the same time.”(4)

Why is that important to people who struggle with self-control; because it shows that our brains have an even greater capacity to help us with issues of self-control than once thought. We just have to figure out the triggers needed to get the process going, and researchers are hard at work trying to do just that.

“Imagine how much better life could be if we knew how to flex the willpower muscles in the brain and strengthen them with exercises,” says Colin Camerer, Professor of Behavioral Finance and Economics at Caltech. (5)

What if physically, while you were engaging those self-control ‘muscles’, you were also depleting them for the next test of your will? According to research done by Roy F. Baumeister, Professor of Psychology at Florida State University, and his colleagues, it’s possible. Their research has led to the development of the Strength Model of Self-Control, which takes into account the depletion of carbohydrates (blood glucose levels) as self-control is exerted; basically you are too physically exhausted to continue exerting self-control for a subsequent task.

However, not all researchers are on board with this model. “Psychological scientist Dr. Daniel Molden (Northwestern University) and his colleagues decided to test the energy model in a series of four experiments in which participants’ baseline glucose levels were assessed prior to performing tasks that required self-control. They found no evidence for a relationship between self-control and glucose metabolism.” (6) Blood glucose levels did not change.

In a secondary experiment, the participants were given a sugary mouthwash to rinse with after a task requiring self-control, and again glucose levels did not change since no sugar was ingested, but remarkably self-discipline was restored for their next task; rinsing with the sugary solution appeared to restore the volunteers’ lost willpower; why?

“The scientists believe the mechanism is motivation. They believe that the mouth “senses” the carbohydrates in the mouthwash, and this sensation signals—likely through the brain’s dopamine system—the possibility that a reward is coming. Sensing that an energy boost is coming, the brain is motivated to put in extra effort. In short, the sugar motivates—rather than fuels—willpower.”(7)

*Tired after hours of conducting research for this article, I rose from my chair and went straight to the fridge. I grabbed some raw cashews, which I love. I was acutely aware of my feelings; tired, ready to stop working, ready for a break. I instinctively grabbed the cashews and didn’t even try to think about eating something even healthier or not eating anything at all. Where was my self-control? Maybe I need to reread this article!

*When my boys were young, they learned to snowboard and ski, becoming experts in the field. They consistently entered free ski competitions, but when my oldest went to college, his brother, four years his junior, lost his motivation to ski. The competitions ended quickly because he relied on his older brother to set them up, plus he missed the camaraderie.

*My son and his girlfriend just started exercising again. “What made you start today?” I asked, he said because he felt less stress with school it made him think more clearly and he felt more in control of his life. It also didn’t hurt that the weather had improved. He also said, post work-out, that he’d forgotten how good it felt to exercise.

Let’s talk marshmallows. Picture yourself as a four-year-old preschooler, and you have a large puffy sugary marshmallow sitting in front of you, and you have the choice to eat that one now or wait fifteen minutes and get two; which would you pick?

In the sixties, Psychologist Walter Mischel conducted this experiment at Bing Nursery School at Stanford, testing the youngsters’ ability to delay gratification by using self-control in order to gain a higher reward in the end. He followed the test subjects from preschool years through high school as well.

What’s most interesting about the study is the tactics the children used in order to be successful. They sat on their hands, moved around in their chairs, covered their eyes, stared right at the lone ‘mallow’, looked the other way, sang or talked to themselves; basically anything to cause distraction. For those that waited, they were rewarded with a second ‘mallow’ and down the road they proved to be more well-adjusted and successful.

Taking a chapter from this experiment, it all gets down to outwitting oneself to be more successful.  If sitting on your hands works to keep you from doing something you will regret then do that, otherwise try some of these tips: get support, use a goal or reward to motivate you, distract yourself, create a routine, change a routine, lower stress and anxiety levels, use a positive memory, know your weaknesses, have your spouse hide the cookies!

Dr. Denise Cummins PhD., a research psychologist, offers this advice, “. . . simply spending time on something that you do well can improve a sense of perceived control over one’s life. Simple examples are gardening, playing a musical instrument, or even spending a little time playing video games that allow the user to advance through levels of expertise—anything that makes you come away with the feeling of “I can do this” teaches your mind and body what it feels like to succeed.” (8)

On a personal note, I exercise six days a week, but, I don’t always want to do it.  Here’s how I deal with my ‘self’: I know exactly what I will be doing for exercise each of my six workout days, and I work out at about the same time each day. I motivate myself with music, I say my prayers- even when I’m hitting the punching bag, and some days when it’s really tough I ask for a little help from the ‘big guy’ to get me through.  It’s what works for me.  I also carry with me a strong desire to stay fit; I know the results I want and the reward I will get if I am disciplined.

The first step to a better sense of well-being is surely the most difficult, but taking your impulses and exerting control over them will help you to create the order your desire in your life.  How does that happen – you have to make it happen!  Until you take the first step, you can’t take the second.  Once you start, the steps add up and suddenly it’s weeks down the road and you’ve created a positive routine that was well worth the effort! 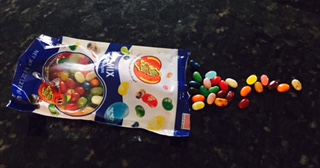 Again, starting is the most difficult part, believe me I know.  Those sour delectable jelly beans keep ganging up on me; I’m seriously considering sitting on my hands or breaking into a rousing rendition of ‘The Hills are alive’.