Don’t throw away those holiday hugs with the gift wrap just yet.  Those warm embraces given so unselfishly in December are just as important every day of the new year as well!

One of the most memorable experiences I had over the holidays was when I made a quick pit stop at my neighbor’s house.  With gift in hand I was welcomed into their bustling kitchen where a late Christmas Eve dinner was being prepared.

I only spent about five minutes in their company, extending well wishes and sharing a quick kiss under the mistletoe, but what made the biggest impression on me was my neighbor’s elderly parents.

We conversed for a few moments about our plans for the holiday, then, not wanting to spoil their feast, I decided it was time for a quick exit. What happened next was truly unexpected and heartwarming.

As I approached my neighbor’s father to bid farewell, he gently thrust his hand toward me, but I decided to go in for a hug instead. I then moved to his wife and hugged her as well. They both embraced me without reservation, and in all honesty, it felt good.

That simple gesture came so instinctively to me. I’m not sure if it was the holiday cheer that provoked it, but no matter the reasoning, it left me with an uncanny feeling of happiness. Unabashedly sharing a hug with people I had just been introduced to; what a crazy idea.

There are multiple interpretations of touch depending on how it is given, and not all touch is beneficial.  A belligerent poke in the eye or punch in the nose relays a very different message than a caress of the cheek or even a congratulatory slap on the athletic behind. But, no matter how it is transmitted, our human nature knows that touch is critically important to our development and survival.

The meaning of touch is a fascinating subject for psychological researchers. Matthew Hertenstein, a psychologist at DePauw University, conducted a study in 2009 demonstrating “that we have an innate ability to decode emotions via touch alone.” (1)

The study offered interesting data, but it’s Hertenstein’s observation of participant’s apprehension about the experiment that was sobering, “This is a touch-phobic society,” he says. “We’re not used to touching strangers, or even our friends, necessarily.” (1)

“If touch is a language, it seems we instinctively know how to use it. But apparently it’s a skill we take for granted. When asked about it, the subjects in Hertenstein’s studies consistently underestimated their ability to communicate via touch.”(1)

It’s a shame that we tend to fight our human nature at times, especially when something as significant as showing someone we care is so important to not only the recipient but to the giver as well. 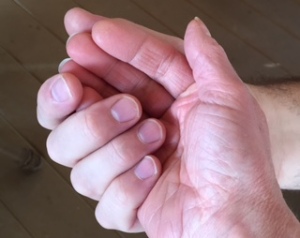 “Receptors sensitive to pressure, warmth, and other triggers, cause our bodies to release a rush of oxytocin. Oxytocin has been studied in monogamous prairie voles, in nursing mothers, and in human couples where it is thought to be involved with the promotion of associative behaviors such as compassion, and which builds trust between individuals.” (2)

Aside from those important findings, touch is key to cognitive, physical and psychological development. Dr. Tiffany Field, from the Touch Research Institute, studied the effects of touch on two groups of premature infants; those in incubators and those who were exposed to light touch daily. (standard protocol for both groups)

“Despite being fed exactly the same amount, the premature babies who were lightly massaged several times a day gained 21-47% more weight than the premature infants who were not touched.”

“Studies have shown that babies who are held and touched in a positive way more often also demonstrate lifelong resilience to stress and improved cognition.” (2)

In another study concerning the elderly, “therapeutic touch” was found to decrease stress-associated cortisol levels, and the frequency of agitated behaviors (such as pacing and vocalizations) in individuals suffering from Alzheimer’s Disease.” (2)

These studies aren’t really shocking; in fact, they make sense.  But, after reading Dr. Hertenstein’s study, it seems that although we need touch and are innately prone to exhibit it, we also tend to fight its significance.

Touch is a transitive verb meaning, “to bring a bodily part into contact with especially so as to perceive through the tactile sense:  handle or feel gently usually with the intent to understand or appreciate.” (3)

“Altruism is helping behavior that is motivated by a selfless concern for the welfare of another person.” (4)

Let’s not live in denial or fight against our human nature. Instead, let’s combine a bit of altruism with a smattering of touch and give the human race what it needs to survive.  Hug someone today; it’s a simple thing to do!