Wine drinkers everywhere who are waging war against their cholesterol levels are looking to be validated in their love affair with the fermented grape.  Inquiring minds want to know: can a glass of red wine positively affect  cholesterol levels?

The answer is yes, but it’s not just wine that can do it. “Moderate amounts of alcohol raise levels of HDL, “good cholesterol,” and higher HDL levels are associated with greater protection against heart disease.”(1) If you currently drink alcohol in moderation, depending on your genetics, lifestyle, and personality, ‘the drink’ can actually do your heart some good.

How you ask? A study reported by The National Center for Biotechnology Information revealed that “Alcohol consumption raises HDL cholesterol levels by increasing the transport rate of apolipoprotein A-1 and A-11.”(2) In layman’s terms, the presence of alcohol helps to move fats and triglycerides through the bloodstream more quickly.

In another study, the National Institute on alcohol abuse and alcoholism published an article based on an analysis of 42 published studies entitled “Alcohol’s Effects on the Risk for Coronary Heart Disease.” Through the analysis of short term trials where 30 grams of alcohol were consumed by participants (two drinks per day), they found the positive rise in HDL levels outweighed the negative rise in triglyceride levels, and there was a positive reduction in blood clotting as well. The result appears to be a 24.7 percent reduction in the risk of coronary heart disease.” (3)

In support of this finding, Cholesterol.about.com states, “current studies reveal that HDL levels can increase by up to 12% in people who drink one to two alcoholic beverages per day.  LDL can be lowered by 4 to 8% with moderate alcohol consumption.”

Focusing on the word ‘moderate,’ the federal government’s Dietary Guidelines for Americans 2010 defines moderate alcohol drinking as up to one drink per day for women and two drinks per day for men. One 12-ounce beer has about the same amount of alcohol as one 5-ounce glass of wine, or 1.5-ounce shot of liquor. (4)

So, now that we know alcohol can actually help fight coronary heart disease, the question still remains, “Is red wine more beneficial than other types of alcohol in the fight against cholesterol and if so why?

One reason why it could be more beneficial is the presence of antioxidants. “The alcohol and certain substances in red wine called antioxidants may help prevent heart disease by increasing levels of HDL and protecting against artery damage.”(5)

Red wine has 20 times the antioxidants of white wine; so right off the bat, it’s just better for you. Both wines contain a polyphenol (an antioxidant that may help to protect the lining of blood vessels) called Resveratrol, which is found in the skin of grapes.  Since red wine ferments longer than white, it contains higher resveratrol levels.

Besides a boost in HDL and lowering risk of heart disease, resveratrol may help protect against the spread of cancer cells, protect nerve cells in connection with Alzheimer’s, and prevent insulin resistance associated with diabetes (6), which is all great news.

With that said, what about the doubters who think resveratrol is over celebrated. As with most information found online, there are conflicting reports on resveratrol.  I found one human study conducted from 1998 to 2009, that contradicts the current hype about resveratrol. In Italy, 800 individuals, 65 years and older, were studied and “no association with higher levels of resveratrol and lower risk of heart disease or cancer,” could be found. (7)

Okay, good to know but here’s the deal – that same article that said resveratrol does not have huge effects on our long term health also referenced the American Heart Association’s endorsement that downing a drink a day is advantageous to our heart health.

The truth is the jury is still out on resveratrol because more studies need to be done. In the end, antioxidants are a good thing and to think you might get something good from a glass of red wine ain’t such a bad thing.

So, let’s go with that and attack the question of ‘how much resveratrol is in my glass of wine’? “To get the equivalent dose used in some animal studies, people would have to consume 2 grams of resveratrol (2,000 milligrams) or more a day.” (8) Basically, to get the same dose of resveratrol used in mice studies, a person would have to drink more than 1,000 liters of red wine every day,(9) and that is clearly not an option.

Now the question becomes, “where else can we find resveratrol? You can buy supplements, but that’s an ‘iffy’ proposition since the FDA does not regulate resveratrol, so you really don’t know what you’re actually getting in a bottle.  And, because few studies have been conducted on humans, it is unclear what effect resveratrol supplements will have over the long run. Next question – what about getting it naturally? 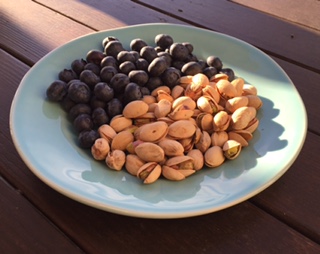 Besides red wine, resveratrol can also be found in blueberries, cranberries, mulberries, grape juice, peanuts and pistachios, so you don’t necessarily have to drink your way to good health or take ‘iffy’ supplements. But, if you insist on pursuing supplements, be vigilant and keep up with current studies so you can make educated decisions about correct quantities, risks, benefits, and cost.

So, after all of the information presented, it appears we can raise our glasses in ‘heart‘y celebration; but, let’s not be hasty.  We have to discuss the risks of alcohol as well; kind of a must do in this situation.

We’ve checked off the positive HDL/coronary heart disease link as well as other possible positive reasons to consume alcohol, but what are some known risks that can surface for the moderate drinker.

According to cancer.gov, “The National Toxicology Program of the US Department of Health and Human Services lists consumption of alcoholic beverages as a known human carcinogen.” “Ethanol, found in alcoholic drinks, breaks down in the body to acetaldehyde, which is a toxic chemical and probable human carcinogen.”(10) Alcohol can damage DNA, proteins, and lipids through a process of oxidation, and our body’s ability to breakdown and absorb nutrients can be impaired, which may be associated with cancer risk.

So there it is; the cancer risk. But, cancer.gov also sites this tidbit, “Researchers conducting studies using purified proteins, human cells, and laboratory animals have found that certain substances in red wine, such as resveratrol, have anticancer properties.” Now that’s interesting, but they also state that “clinical trials in humans have not provided evidence that resveratrol is effective in preventing or treating cancer.”(10) Not a surprise.

Bottom line on ‘the drink’; you may want to stop drinking if you have a history of cancer and continue moderately if you have a risk of heart disease. All in all, you have to look at you: your personality, your genetics, your lifestyle; weighing the risks and benefits as they pertain to you. And let’s be real  – heavy drinking has absolutely no health benefits.

According to my research, you can’t go wrong eating foods where resveratrol occurs naturally, and it seems that a moderate amount of wine or other alcohol could actually help you in the long run. So lift a glass, whether it be grape juice or red wine, eat a snack of blueberries or pistachios and enjoy whatever benefits you can get.

(P.S. –  Concerned about the effects of any alcohol on your liver; throw some exercise into your day as well as plentiful glasses of water – they both help to move toxins through the body, which in turn purifies your blood.) livestrong.com