Two small salmon swivel rockers sat in front of the family room window. For the last ten years of her life, I took up residence in one of those chairs, listening intently as she reminisced about the past and asking questions about her youth. That swivel seat afforded me time to know her not only as my grandmother, but as a woman; sharing views on current events, and opinions on family and faith. I had a front row seat to her life, past and present, and when I was there, in that silvery gray, barn board paneled, cozy family room, I felt at home.

I met my grandmother when she was 47 years old. I’m sure we made a connection the first time our blue eyes met. I had no idea then I would be blessed to share fifty-two years with this unique woman.

I spent my first five years living next door to my grandmother. Even as a young child, it became ingrained in me that she and her charming red brick home, decorated impeccably with her signature style, were synonymous with one another; it was impossible to separate the two.

Childhood memories flood my mind; warm summer days spent painting the slate patio with a barbecue brush and a pail of pool water, counting and sorting the contents of my trick or treat bag on her family room rug, snacking on crackers retrieved from the tall blue and white tin Saltine container, and countless others.

The red brick house was just one expression of my grandmother’s true self. Her meticulous attention to detail was plain to see in everything she did: gifts wrapped with precision and adorned with handmade frilly bows and tiny cards addressed in delicate cursive handwriting; dolls, afghans, and embroidery pieces made specifically for the recipient; and delectable date pin wheel cookies – the crowning jewels to a platter of homemade goodies. But, it was not only what she did that made her unique, but how she carried herself as well. Always stylish in her apparel, always delicate in her demeanor; the two melded effortlessly leaving me with no other conclusion but to assume that in almost every way, she was perfect.

My grandmother was a constant in my life until I grew up and moved hours away from the red brick house to raise my own family. I missed a lot of years with her, but once my children were grown, I realized the odds of her living forever were minimal and I had better grab any time I could. I had questions about her life; I was searching to know Margaret.

We would talk for hours, sitting in those tiny salmon colored chairs, and she would tell me about her life growing up in Vermont; the struggles and the joys. She spoke lovingly about her mother commenting, “She put her family first; her children came first,” and then fondly recalled, “I remember that I gave my mother a hard time going to school.  I cried on the walk to school and my mother would take me back home, then we would try again the next day.” She respected and truly treasured her mother saying, “She was a real lady; exceptional.”

That comment led me to ask her to describe herself in her youth, she answered, “I was a very quiet girl; average, nothing outstanding.” I believe her description was a modest assessment; the woman I knew was far from “not outstanding.”

As a teenager in the early 1930’s, she was forced to board in town during the winter months to attend school, “It was not easy for me, I liked to be home, but mastered it and made the dean’s list (my last two years) which was a great achievement for me.” She was smart, determined, and brave.

As a teen, she recalled the day when a young boarder came to her parent’s home. Without hesitation, he brazenly told her mother, “I’m going to marry that girl someday,” and years later, on her 18th birthday, he made good on his promise. She aspired to be a teacher after graduation, but set her dream aside to raise their two children, and then, unexpectedly found herself raising them alone a few short years later.

For years, she would struggle to support her family, working in various factories and moving the family often, until that fateful day when she would meet the love of her life, reluctantly giving into his persistence, “He insisted he wanted to marry me but the age barrier I thought too much… but he won in the end.” The couple moved to Massachusetts and started a residential building business. Their hard work and persistence showed itself not only in the business but in their family life as well; they were blessed with a son despite her health issues.

When cancer struck, she dedicated herself to her husband’s care, driving hours to Boston for treatment, only to lose him after twelve years together. With her oldest son’s help, she kept the business afloat and then years later, found love a third time, “It was nice to have someone to share your life with,” she said.

My grandmother’s inner and outer beauty were undeniable, and the men she shared her life with were quite aware of the treasure she was. She was a loving child, a loving wife, and a loving mother, who went through her share of difficult times. She was resilient and hardworking; my grandmother was far from “not outstanding.”

In her late 90’s, her mind was incredibly sharp; the past described in vibrant detail, the present discussed with honesty, compassion, and understanding for all people. She was a progressive soul. 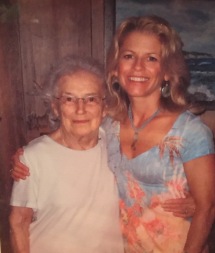 For years, she would look at me intently from her salmon swivel rocker and remark, “I just don’t know why I’m still here,” and I would reply, “Well Gram, you must still have more to give, even if you don’t know it.”

Thirty days’ shy of her 100th birthday, she passed; her work on this earth finally complete. She was undoubtedly the center point of my family, and whether she knew it or not, her presence in our lives meant everything.

Lil Serena lil fire👊🏻
The most unsatisfying mowing experience🥲
Comparing student loan forgiveness to our Lord and Savior dying on the cross for our sins is sacrilegious.
I walked across the grass this morning…I think I broke it🤭