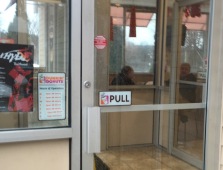 The other day I found refuge in an unfamiliar Dunkin’ Donuts; trying to kill a few hours while my husband attended a meeting. As I walked toward the entrance, I encountered two elderly people grabbing a quick puff before entering the establishment; they followed me in.  As I stood at the counter, I heard numerous robust lung clearing coughs behind me, followed by heartfelt salutations.

After ordering my coffee I moved just past the group of friends, taking a window seat at the high

counter facing the parking lot; my back to the group. In pure 21st century form, I pulled out my iPad and started conducting research for my next article. I purposely set myself apart from the rest of the patrons. I wanted to focus, to eliminate distraction, to meld into the cool plate glass window in front of me, the counter and the stool I occupied. But within moments of my arrival I found myself enveloped by the goings on in the shop, and much to my delight I became inspired.

I listened as the foursome behind me chattered about mutual friend’s medical conditions and frigid temperatures expected over the weekend. I listened as they commiserated over future medical appointments, shared a recipe which included making a flour roux, and discussed the best fix for a malfunctioning coat zipper; soap of course.

Their conversation was consistent and quietly mesmerizing and I found myself unable to not eaves drop. And then, just as quickly as it had begun, it ended; the chatter came to an abrupt halt. I tried to catch a reflection of the group in the window to see what was going on; were they consumed by newspaper headlines or just out of things to say? Suddenly the sounds of the employees working behind the counter overtook the dining area, creating a cacophony of slamming oven doors, ice crashing, cash register buttons beeping, and the trained response echoing through the shop – ‘have a nice day’.

I waited, not wanting to turn around, until finally I heard multiple exhalations of dismay resounding as the scratch tickets, which had garnered their full attention for a good number of minutes, proved unrewarding.

In general, their conversation was quiet, calm, and very natural. They seemed to share information with comfortable ease; in a way that only familiarity and trust can foster. They were simply friends grabbing a coffee, enjoying some food, wishing a friend a happy birthday, and reveling in a few moments of socialization before heading home.

During my stay, patrons of all ages were in and out, grabbing quick sandwiches and coffees for the road. They were ‘stranger’ consumers to the employees with one objective in mind – to get their food quickly and be on their way. It was obvious the group behind me was different; they were ‘regulars’ and were greeted as such by the employees. My educated guess is that the ‘regulars’ were predictable with each visit; not straying from their ordering regimen, their seat assignment, or their conversation.

Within fifteen minutes of their exit, (except for one gentleman who had briefly conversed with me about the tiny keyboard I was using), a second wave of elderly patrons entered intermittently. They greeted one another with a ‘hey, how ya doin’, sat at different tables scratching tickets, drinking coffee, and sharing medical, pet, and scratch ticket information from a far, as if they were sitting in a communal living room. They offered each other advice: “When you’re right you’re right, and when you’re wrong you’re still right,” one woman said in a gravelly voice, while the group laughed heartily, and then again with even more vigor when one gentleman thought it a great phrase to use on his wife.

The ‘double D’ is not a fancy coffee shop. It offers a fairly simple menu, adequate seating and colorful yet plain ambience. It is void of cushy chairs and couches, void of coffee bar eccentricities, and other than me, void of patrons spending hours on iPads. But, the one thing it was not void of that day was human connection. 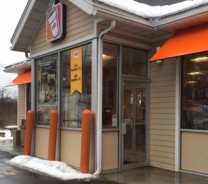 For most of us, we go in and out of takeout franchises quickly, but as I witnessed in the matter of a few hours, this coffee shop actually became a place of refuge, of socialization, and celebration. It became a home of sorts for loyal patrons who took comfort in the fact that when they entered an acquaintance was there waiting for them to share an embrace, a laugh, and a plethora of thoughts, concerns, and stories.

After two hours of eaves dropping and note taking, I found myself strangely connected to the shop and its ‘regular’ patrons. When my ride pulled in, I almost wanted to stay longer to see what cast of characters would appear next. As I packed my bag and put my coat on, I wondered if I should bid farewell to the one inquisitive gentleman who had graced the premises even before I showed up. As I headed toward the door I heard a hearty, “Goodbye.” He was waving trying to get my attention. I waved back and said goodbye as well, and then he told me to stay warm with a big grin that made his large mustache spread across his upper lip like a white woolly caterpillar.

I knew I’d probably never see him again, but I had a feeling I was leaving him in good hands, because without a doubt, he would be back the next day or the following Friday and so would his friends. They would greet each other with a handshake or hug, a ‘hey, how ya doin’, grab a coffee and share their lives with one another, all within the simple unassuming four walls of a familiar gathering spot, that just happens to be splashed in bright pink, orange, brown and white.