Let’s play the game, “Never have I ever”…

Never have I ever visited a gravesite on a yearly basis. At 53 years-old I have never visited the gravesite of a loved one on a yearly basis. Why not? It’s a fair question and I’ll give you three answers. For starters, although my parents could have kept up with such a tradition when I was young, they certainly did not pass it on to me. Secondly, I personally acknowledge that although the physical form of the deceased is buried beneath the etched stone, I believe their spirit has moved on to greener pastures which allows me to speak with them any time I please, not only when standing over their tombstone. Thirdly, although Memorial Day conjures up images of flags and flowers placed in honor of military service, it appears that pilgrimages to cemeteries are a lost tradition for people my age and younger.

Loss in my life, until last year, has been minimal. I lost a grandmother in 2004 and a step-grandfather a few years prior to her. But last year I lost my father-in-law and my father’s mother who was one month shy of a century old, and I was very close to them both. With the one-year anniversary approaching, I felt it necessary to visit the gravesite of my grandmother, and so began a cavalcade of visits to all of the local cemeteries where my loved ones had been laid to rest.

My aunt and recently deceased grandmother were sticklers for yearly pilgrimages to various cemeteries in honor of loved ones passed. So naturally, I felt it appropriate for my aunt to accompany me, actually, to be my guide to the cemeteries housing the remains of my loved ones. We started with my step-grandfather.

A large headstone with his mother’s maiden name on one side and his father’s last name on the other marked the area where a number of family stones lay flat in the grass. Some stones were barely visible; encroaching grass and dirt so brazenly swallowing them up. We used the toes of our shoes to kick it back into submission. My aunt subsequently led me to other graves where there were family connections; we became lost in a flurry of names and dates, laughter ensued. 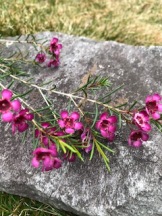 Before we left, I pushed some wildflower stems into the soft dirt encircling my step-grandfather’s grave marker; the deep pink flowers draped sweetly over his name. We moved on from there to the adjacent town, just a few miles away, where my mother’s mother was laid to rest.

My aunt knew exactly where she was buried as she would take walks on occasion through the cemetery. I can remember a time when I did the same; I was fascinated by cemeteries, especially old ones. The fragmented stones, the old-fashioned names; it was amazing to think that these people were once as vibrant as me, living their lives on this earth. My grandmother’s headstone was up a hill; the car bumped and lurched its way over random raised spots of pavement which quickly turned into a dirt road littered with inescapable potholes and frost heaves. Her stone was in an open space; it had her last name in bold letters on one side and her full name and dates on the other. Eerily, it also had my parents’ names as well; death dates not yet etched into the stone. The last time I was there was for her funeral on a chilly January day; we weren’t there very long. I pushed some wildflower stems into the soft dirt by the stone. The deep pink flowers fluttered gracefully in the wind. Our last stop would be the most impactful; my father’s mother’s grave.

We drove a short distance to the next town, where a white picket fence just off the roadside marked the cemetery. I was familiar with the setting; my family gathering there almost one year prior for the memorial service. The mountain views were stunning, and the rich farmland reached far and wide below the hilltop. My aunt and I stood for a moment in silence just looking at the stone, and then I put my arm around her shoulder and simply said, “one year.” Her hand raised to cover her mouth and then she abruptly wandered a few steps away to regain her composure. She and my grandmother were not only mother and daughter, but travel companions and friends. A container of purple pansies sat in a patch of dirt in front of the grave; my aunt had brought them weeks before in honor of the yearly spring excursion she and my grandmother would make to the garden center. I pushed the wildflower stems into the soft dirt in front of the headstone my grandmother shared with her true love, her second husband. The deep pink flowers swayed in the wind, gently caressing the pansies. We stayed for a bit longer, then took a walk.

The cemetery was near my grandmother’s house, so we walked up and down numerous streets in the neighborhood, my aunt pointing out various homes my grandmother, my parents, and my aunt had lived in at one time when the neighborhood was being constructed more than sixty years prior. My grandmother and her second husband were the contractors building the development; they jumped from one home to the next as each house sold. There was a lot of history for my family in that area; my aunt reminisced as we walked. We stopped to talk to a gentleman doing yard work on that unusually warm day; the conversation leading to unknown common threads my aunt and he shared with respect to where they had lived over the years, stringing all the way back to the green hills of northern Vermont. It was a nice morning for both of us.

That one day changed me; although I firmly believe that each of my grandparent’s spirits have moved on to their eternal homes, I now can see the worth in visiting their gravesites. It was actually a powerful experience to see their names engraved on those stones, and it was good to reminisce and remember, and learn things about them from my aunt that I otherwise might not have known.  It was important to be there. I hope to go back often, to bring flowers, and to start my own pilgrimage tradition.

My father always says birth and death dates are one thing, but it’s the dash in between that tells the whole story; one tiny little dash represents a lifetime. Remembering those who have passed can take place anywhere but visiting a final ‘resting place’ has special meaning. The words “in honor” are fitting in recognition of those who once served patriotically in the military, but I believe every person deserves to be honored by those who remember and by anyone who can appreciate a simple dash.

Pilgrimages to cemeteries may be a lost tradition, they may even appear unnecessary to some, but what they can provide is an uncanny depth felt only when your feet hit the sod and your eyes gaze upon that etched stone.