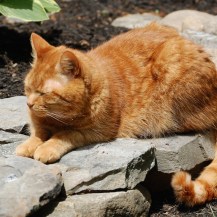 For anyone who has ever lost a pet, I feel your pain – still. One year ago we put our cat Carmel to sleep; it was difficult to say the least. I wrote this essay in April of 2015 to express my love for him, but also to show that being human while you are caring for another – whether pet or person- is okay. Moments of strength and positivity can easily be sabotaged by anger, frustration, guilt, and concern; it’s just part of being human. This essay is for all of you who are suffering from the loss of a pet; whether it be years in the past or last week.

“I left the room defeated, and even worse, almost resentful. I set the plate down angrily on the kitchen counter, turned, and without hesitation, walked purposely into the family room. I gave my bewildered husband a look and fair warning as I sat down and grabbed a pillow. I held the pillow to my face and screamed until every bit of defeat, anger, and resentment dissipated. 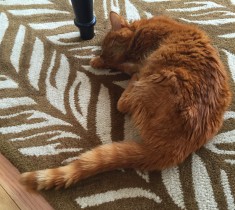 As I sat on the couch, broken, I tried to fight back the probable onslaught of tears, but they came anyway. Months of caring for my diabetic cat had festered, and a barrage of emotions hit me all at once; anger, concern, fear, and frustration. I responded to my own sense of inadequacy by holding that pillow to my face, but I don’t think it made me feel even remotely better – I just felt guilty and inept. I wanted him to eat, to regain his strength, to be vibrant again; even I knew I was asking too much.

It is truly inexplicable how we can forge such tight bonds with our pets. Carmel, a tiger cat with a rich dark orange coat, was our last pet.  He developed diabetes as many cats do in their later years, at around 15 years old. I wasn’t shocked; the signs were there. After an educational meeting with the veterinarian, I knew the care he required would rest on my shoulders.

I managed to get over my fear of sticking him with an insulin syringe twice a day, but was never comfortable testing his blood sugar at home; a decision that caused me great regret when his final days came to pass.  I was able to control his glucose levels for a solid year by taking him to the veterinarian every so often to have them check his levels; it was easy enough and although costlier, it worked. 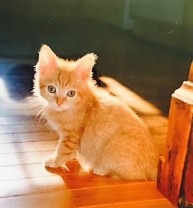 We adopted Carmel from a private home, a shelter barn actually, where a multitude of rescues were waiting for adoption. When he first came to us, he truly desired comfort; finding refuge on my husband’s supportive shoulder; cuddling into his neck as he sat at his desk. But as he grew, he became more independent, no longer seeking out a warm human body for comfort. Eventually, he rebelled to being picked up, (stomach issues), and would rather decide himself if he wanted to, out-of-the blue, take a nap across a warm lap. 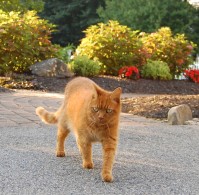 He was a typical cat who loved lounging in the sun, sleeping his day away, carousing day and night, and hunting. He’d peer in through the front door window, rodent or bird in mouth, proudly looking for our approval. He’d chase squirrel and chipmunk alike; he wasn’t picky.

He may have been a typical feline, but he was full of unique personality as well. He loved to blissfully roll on our dog’s bed when vacant, and seemed to wait for the dog’s return almost to say – ha, I’ve done it again! The dog, however, was never amused, and would raise a lip – sneering with contempt, but he never harmed Carmel. He also loved to clean and pamper himself; many times offering a few unselfish licks to my son’s head in loving servitude. And of course, the kids, no matter their age, relished giving him the attention he so deserved. 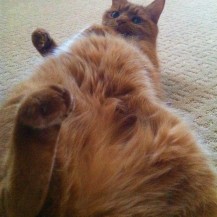 He held his tail in a unique upright fashion whether running to greet you, or stretching after a long nap; signature Carmel. He never missed an opportunity to warm his paws or belly on the Vermont Casting gas stove, while gazing wistfully out the porch windows at the wildlife daring to move about the yard. And without a doubt, his most comfortable lounging pose was flat on his back; exposing his delectable peanut butter fluff. He never missed an opportunity for a treat; when the refrigerator door opened, he was on the counter in a flash, waiting for a scrumptious squirt of whipped cream.

When Carmel was around six years old, he had a seizure, which consequently caused him to fall from the living room couch to the floor. We didn’t know what was happening to him, so we rushed him to the emergency room where we were told it was most likely a case of toxoplasmosis; the result of eating a bad mouse.

He certainly got into his fair share of fights, the worst happening a few months after the diabetes diagnosis. His belly was slashed, requiring surgery, and he suffered a gash over his right eye. After healing from that battle, it was evident that his nights out were over; he just couldn’t defend himself anymore. For all the scuffles he survived, in the end, it was the diabetes that truly tested him.

Diabetes is a demanding illness. I adhered strictly to the twice a day feedings and insulin shots-absolutely no extra food in between. We planned our days and evenings accordingly, and hired help if we wanted to go away. But, as time went on, Carmel’s glucose levels fluctuated drastically, and I found myself at the veterinarians more often than not, trying to understand what was happening and how to deal with it. I exhausted the internet as well, looking for answers and advice.

For the last few months of his life he suffered diabetic neuropathy; loss of nerve function in his back legs, creating a lack of muscular strength.  I built him steps out of cushions to make it easier for him to climb into the chairs for naps, and moved the litter box to the main floor from the cellar, customizing it on three sides with a platform made from old ceramic floor tiles and cut up small door mats, so he wouldn’t slip. I did what I could to make his life easier.

In his last few months, as his weight continually decreased, I detracted from the highest protein varieties of food and fed him morsels of moist food in gravy; getting him to eat trumped the excess carbohydrates that early on were not good for his diet. I would sit by his water bowl and hold the plate for him, using a fork to help him eat. 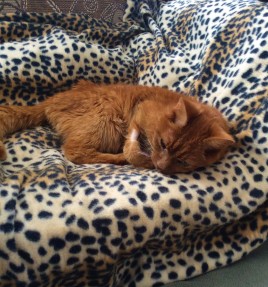 By the end, I was bringing the food to him in his chair. According to the veterinarian, I had one hour from the shot to get him to eat, and that hour was spent reheating food, trying different flavors, and basically not giving up. I wrestled consistently with playing God, still not confident that his time had come.

The night before we let Carmel go, I told my husband I was sleeping in the dining room with him; he was having trouble walking and didn’t look right to me, plus I knew his levels were off the charts-high, from a veterinarian visit that day. Within an hour of going to bed the seizures began and I struggled with what to do; it didn’t make any sense to me. I woke my husband, and we rushed him to the animal hospital, shocked to find his glucose levels had plummeted drastically. The questions flooded my brain; how could that be when his levels were so high during the day, and why didn’t I reason with myself-seizures were a clear sign the numbers were low. If I had only known, been more sure of myself, I could have rubbed Karo syrup on his gums, possibly stopping the seizures. Regret is a bitch!

After the technicians stabilized Carmel, they brought him to us wrapped in a blanket. His eyes looked vacant and we knew we had to act. Over the next five minutes we were saying our goodbyes, kissing his head and running our fingers along his deep orange coat, and then, we watched our beautiful boy peacefully slip off to sleep.

The following days were emotional; we’d cry at

sporadic times, apologizing to each other for breaking down. Whether we were in a restaurant, a store, or simply watching television, we’d well-up without warning. When the woman at the crematorium told me they would take good care of him, I cried.

It took me awhile, but I had to come to grips with the fact that I did my best caring for him. Upon our final meeting, after Carmel had passed, the veterinarian told me that he most likely had built up an immunity to the insulin, which resulted in the sudden fluctuations in his numbers. That news gave me a remote sense of comfort.

When it comes to putting a pet down, playing God is difficult, especially for me. Who am I to say a life is done. Even after watching our dog die in front of us, I thought I would be smarter and less selfish about deciding to ease a future animals’ pain. I always think they can rally, that they have more affection to give and get, and more life to live. In the end, I probably should have let Carmel go earlier; regret is a bitch!

The bond between a pet and owner is truly inexplicable.  I can still picture his big eyes, faintly hear his meow, and can still picture him lying on the dining room rug as I came downstairs in the morning, waiting for breakfast. Our Carmel lived his own life, but in the process, he shared ours. He is forever woven into the fabric of our memories.  He will truly be missed.

One thought on “Love and loss”